‘The point of poetry is to be acutely discomforting, to prod and provoke, to poke us in the eye, to punch us in the nose, to knock us off our feet, to take our breath away.’

‘He may resort to familiar charms and rubrics, but his obsessions with particular forms and registers and vocabularies never dwindles to insensitivity. His is a triumph of technique—a constant resuscitation of the self and of form.’ 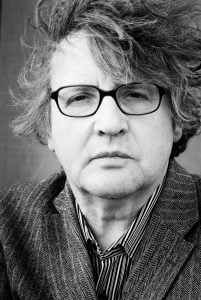 Paul Muldoon was born in County Armagh in 1951. He studied at Queen’s University, Belfast, and was a radio producer for the BBC in the 1970s and ’80s. He now lives in the United States where he is Howard G. B. Clark ’21 Professor of the Humanities and Chair of the Peter B. Lewis Center for Creative and Performing Arts at Princeton University. He has also been President of The Poetry Society (UK), Oxford Professor of Poetry and Poetry Editor at The New Yorker.

Publications include To Ireland, I (essays), Hay (poems), Poems 1968-1998, Moy Sand and Gravel for which he received the Pulitzer Prize, The End of the Poem — a series of lectures he delivered as Professor of Poetry at Oxford, Horse Latitudes, Maggot, New Weather, Madoc: A Mystery, Why Brownlee Left  and One Thousand Things Worth Knowing (2015). Other awards include the Eric Gregory Award, T S Eliot Award, Irish Times Poetry Prize, Griffin International Prize for Excellence in Poetry, The American Ireland Funds Awards, Pigott Poetry Prize,  Geoffrey Faber Memorial Prize and the Seamus Heaney Award for Arts and Letters.

He has translated two collections of poetry by Nuala Ní Dhomnhaill,  The Astrakhan Cloak (Gallery, 1992) and The Fifty Minute Mermaid (Gallery, 2007). Paul Muldoon’s translations from 18th-century Irish poems was published as Lamentations in 2017.

Other titles from The Gallery Press include Kerry Slides, with photographs by Bill Doyle; four plays,  Six Honest Serving Men, The Birds (after Aristophanes), Vera of Las Vegas and The Dead, 1904, an immersive, site-specific play written in conjunction with Jean Hanff Korelitz; poetry collections,  The Prince of the Quotidian, General Admission (song lyrics), Rising to the Rising (2016, a collection in Irish and English of Paul Muldoon’s various responses to commissions for Ireland’s 1916 Centenary) and Wayside Shrines (2009, a special limited edition, with drawings and paintings by Keith Wilson).

Manage Cookie Consent
We use cookies to optimize our website and our service.
Manage options Manage services Manage vendors Read more about these purposes
View preferences
{title} {title} {title}
0
0
Your Cart
Your cart is emptyReturn to Shop
Continue Shopping