The double negative amounts to a positive.

In Double Negative, her seventh collection, Vona Groarke considers the subject of ageing, fearlessly exploring its culverts and cul-de-sacs while also checking this earnestness with sharp wit and trademark style. Here candour is mediated by humour. These are sensual and sensitive poems, written in language asked to be beautiful, wry and true about topics usually either ignored or obscured with greyness and cliché.

Hailed by The Irish Times as ‘a poet of great self-awareness and meticulous craft’, Vona Groarke’s Selected Poems was praised as a ‘collection of almost sublime purity’ (Dublin Review of Books).

Double Negative breaks new ground in subject and approach. It is a daring and distinguished work from one of Ireland’s leading poets.

Groarke’s fine lyricism and wit are present as never before, the humour more mordant, the vision darker; yet the poems are so exact and fine, it is an exhilarating read . . . This is a collection to exult in. — Martina Evans, The Irish Times

It is Vona Groarke’s poetic imagination and her capacity to grab our attention and wrestle that attention to the floor that is most impressive. Images, words, colour and pacing working together to wake the reader and entice them into the poet’s vision . . . It is this and very much more. This is a collection that sparkles with imagination and wit, a collection to be read on any occasion as there is solace, innovation and fun in it. A collection for the ages. — Seán O’Hogain, Dublin Review of Books

“THAT I AM not as young as the morning / is known even to the weather / which knows everything,” Vona Groarke writes in “As ever, Sunday Morning,” a poem that has more than a title in common with Wallace Stevens’s tale of peignoir complacencies. Groarke’s language here, though, as throughout Double Negative, makes for a barer sort of music than Stevens’s rococo. Her diction is pared down, spick-and-span, and built on true things, their bones often showing through. These are, for the main part, poems to do with a changing relationship with time; there’s a certain sense of loss, a questioning as to how it’s all come to this, but the dark feelings are borne with good grace and, often, good humor. One of Groarke’s chief ways to launder these feelings is through analogy, disorientating the reader just enough to escape cliché but not so far as to fall into a distancing surrealism — as in “The way memory operates,” with its deepening, layered setup of “a man scheduled for hospital at two / at ten plants a rosebush by the wall,” which develops in the following stanzas to an image of the narrator:

I come back
to where I was young and my children were young
to where we planted all those summers
and tamped the months around them.

This sort of hands-on approach to the metaphysical is a regular feature of Groarke’s poems — “a bowl of tomorrow” may be found by the bed — as is a certain degree of timelessness, conjured by their natural and symbolic imagery, which runs in interesting parallel with their concerns about aging, its breaking down and erasures. There’s an instinct toward trimming back, not only in the polished phrasing of her syntax, but in her drive toward existential uncovering: “How Do We Get These Lives?” is at once a title and “the question you’d strip to, if you could.” Groarke is interested in the nub, the residue, the endless sense of endings: “You reckon / you shouldn’t have to reach for an ending / when they mostly seem to come so easily.” We frequently find ourselves alone and unmoored, with only light, “the bowl of morning,” or memory to keep us company. A suite of poems, “Against…,” run through the collection, mostly built on single moments, on image and the simple pleasure, the easily overlooked victory. “Against Monotony” is one of several spots of seemingly ordinary time:

a two-hundred mile drive and nothing
at the end of it but a glass of Merlot
and a radio fugue for voice and clarinet
which is a lot, when you think about it.

These are poems that, precisely, think about it — weighing these small ceremonies of contentment or consolation and not finding them wanting. In fact, they are vital buffers against the many storms outside, or, as the same poem has it, an “offhand trick / to be played maybe the once, and gently, / so you get away with it.”

Groarke’s analogies, at times almost parable-like, allow her to create a refocused but recognizable backdrop for complicated thinking, and the trick she’s often really playing and getting away with is of smuggling in something difficult in plain, almost fabular tones: “Back then the future was the bridge / but somewhere it changed to the toll.” “On Reading Love Poems of the Irish,” a small poem that appears on first read not to be making much of a fuss beyond witty textual commentary, likens love in this canon to a stone skimming the water of the centuries. There aren’t many poets writing today whose work would fit comfortably into such an anthology, but Groarke’s could. One reason for this is her embrace of enduring totems and eternal matters in language boiled down to its essences — but there’s something in her tone, too, her gestures toward an older sort of enchantment-in-life, or at least a knowledge of what was always behind that: a cant-less faith in love.

“The Making of Porcelain” is one of the starkest examples of this sort of undatable poem. Groarke’s direct address to the loved one is an incantation and a charm. Her language points to eternity while the closing lines mournfully threaten transience:

You could put in driftwood and your lapis ring,
last night’s dreams and tonight’s, undreamt

it doesn’t matter, for whatever you place inside this bowl
will not be there when you look again.
This is the beauty of the finishing touch
applied with a brush made from your lost years:

come morning, each morning,
when you rise to the light
and think to see what remains to be seen,
the moonlight glaze I chose for you
has undone everything.

There’s much to unpack in these plain lines, that “finishing touch” indicating not only the preparation of the body in death but perhaps also the last rites, the one-for-the-road of Viaticum. Meanwhile, “think to see” is both a program and a description, an active, willful rejuvenation of landscape and object.

This isn’t Groarke’s only mode, and not all of her writing attempts to speak in these timeless, folkloric tones. She can also be tongue-in-cheek, second-guessing some of the charges that might be brought, not least in a poem such as “Against Nostalgia,” its title alone a wink to the camera after what’s gone before. Poems such as these show another of Groarke’s strengths: her gift for celebratory empathy. The refrain of “Against Nostalgia” — charmingly histrionic “Oh’s” — runs in deliberate tension with the title. In the poem, forgotten women — “Beryl, Shirley, Doris, Gail,” with “names that fell like coins between the floorboards” — are hymned for their “private shillings / and songs smuggled out of your young day” (the “day” arrestingly singular). As so often, Groarke subtly undermines the seeming simplicity of it all. Inasmuch as this is a panegyric to the sort of women who have quietly propped up Ireland and got little in the way of thanks, there’s an ominous undertow: “private shillings” suggest the King’s shilling accepted by certain other privates, while lines such as “all lost, unaccounted for” take on a darker hue by means of this parallel with other conscripted youth whose bodies were the battlefield across which progress marched. The poem’s ending, too, has a finely wrought anger to it, memorializing these unknown soldiers of de Valera’s Home Front:

Oh, what did you think the days were for
that lodged, like pips, in the flesh of your throats
as if you were, somehow, fruit?

Unavoidable, given the context, are thoughts of other Irish “pips,” the “fallen women” and all their lodged fruit that would be scandalized at Tuam and elsewhere.

Color is another crucial component to these poems, animating and lighting up the ordinary, but two instances especially stand out as symbols: the blue dress mentioned several times, a sign at once of hope and defiance against melancholy, and the yellow boots of “The Choosing,” which are the morning, “lining everything up to their stride.” The latter poem has an epigraph from W. S. Graham’s “The Secret Name,” but another of his poems, “Dear Bryan Wynter,” is recalled by Groarke’s use of these resonant objects, domestic fixtures which echo and become keys to her rich world of freshening parallels and a lastingness built from the daily materials of routine:

I know I make a symbol
Of the foxglove on the wall.
It is because it knows you.

Groarke makes symbols as touching as Graham’s foxglove, rooted in knowledge and love, which rear up like standing stones in clean lines meant to endure.

How Do We Get These Lives? asks the second poem in Vona Groarke’s seventh poetry collection Double Negative. “You want to be gentle, of course you do,/to slip through as your body does . . .” Then Groarke characteristically turns and the volta answers with eight terrifying, glittering lines of an extended metaphor:

but someone has stitched these little traps
like tiny mirror sequins to your clothes
so every time you move you think
you can’t afford the glare.

When you shut your eyes it’s as if
the white sheet all this flickers on
slips down an inch inside its clips
and the clips don’t move at all.

Groarke’s fine lyricism and wit are present as never before, the humour more mordant, the vision darker; yet the poems are so exact and fine, it is an exhilarating read. Like the cartoon rider “on a horse so real” in Against Anxiety, we know “nothing about tomorrow’, moving on ‘to the next bit of road and the next,/past fury, exhaustion and bafflement/as he drags with his ears a shaft of light/from a moon he thinks is real.” This beautiful, visionary rollercoaster is steered expertly to earth: “I suppose that’s the thing about cartoons:/everyone sees the punchline coming/except the one who’s about to get punched.”

Double negatives count as positives, played out in several more poems which are also “against”, as in the terrific Against Nostalgia with its poignant, ghostly women with the “bunions and bills” and “missing back teeth” Groarke’s familiar haunting domestic interiors are here too, her trademark colours of yellow and blue performing as brightly as ever. But the road feels more dominant both as a metaphor recalling her fine La Route from her last collection X, but also as real tangible entity in The Mancunian Way or Against Monotony with its “two-hundred-mile drive and nothing/at the end of it but a glass of merlot/and a radio fugue for voice and clarinet/which is a lot/when you come to think about it.” This is a collection to exult in. 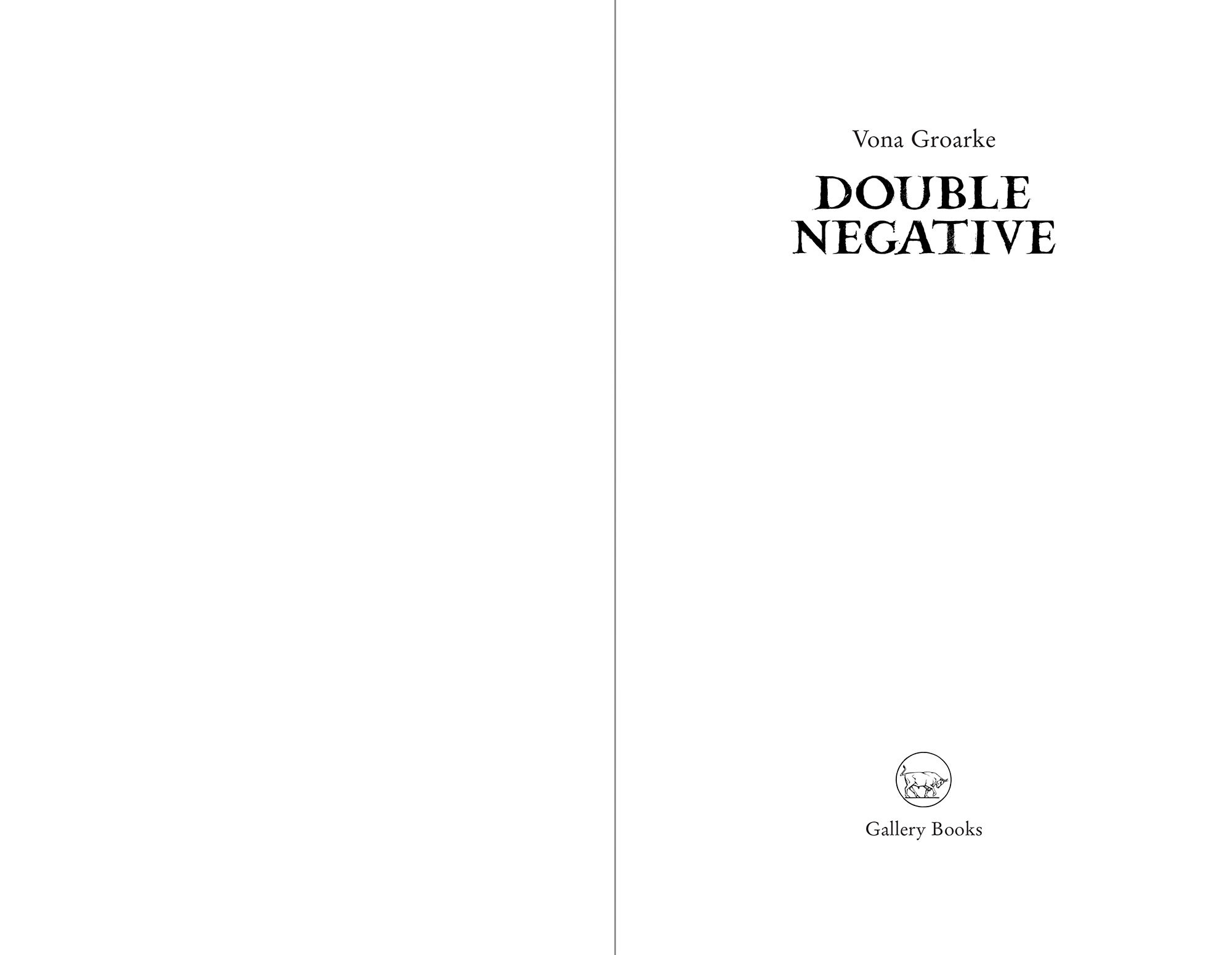 Manage Cookie Consent
We use cookies to optimize our website and our service.
Manage options Manage services Manage vendors Read more about these purposes
View preferences
{title} {title} {title}
0
0
Your Cart
Your cart is emptyReturn to Shop
Continue Shopping